Unexpected yellow patches on garden lawns, magpies, crows and other corvids regularly pecking at the same spot and the grass being rotovated at night is an almost certain sign of chafer grubs or leatherjackets.  And the time to treat them is now.

The creamy coloured garden chafer grubs are about 15mm or 0.6” long and have clearly visible legs (unlike Vine Weevils).  The Garden Chafer Beetles lay their eggs in small clusters a few centimetres below the surface of the lawn between April and June.  They hatch during the summer into chafer grubs that feed voraciously on the roots of the grass.  They stay near the surface of the lawn until the weather turns colder when they bury themselves deeper in the soil and become dormant, to emerge in spring as chafer beetles. 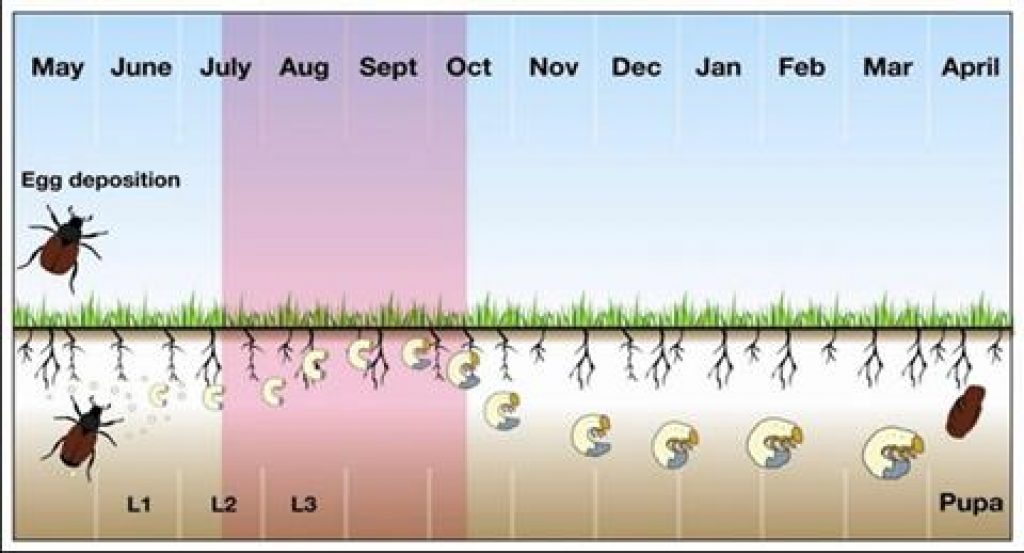 Autumn before the frosts is the critical time for damage.   The grubs are near the surface making them ideal targets for the birds, foxes and badgers.  This is when the grass turns yellow and there are obvious signs of night-time excavations by badgers and foxes.  The damaged grass is easily lifted as it has virtually no roots.  It is also the perfect time to treat them with nature’s very own chafer grub exterminators – nematodes.

These microscopic worm-like creatures occur naturally in garden soil and they specifically target the grubs, killing them.   BASF breed trillions of them at its state-of-the-art facility in East Sussex and Nemasys Biological Garden Chafer Grub Killer does precisely what its name says.

It is mixed with water and applied to the grass via a watering can with a coarse rose or a hose-end feeder.   The treated area should be aerated with a garden fork and watered before the treatment and kept moist for two to three weeks after.   In that time the grubs will be killed, breaking the cycle of destruction.  Children and pets do not need to be excluded from the area. Once the chafer grubs have been killed, the population of nematodes in the soil will quickly return to its normal pre-treatment levels.

Nemasys Biological Garden Chafer Grub Killer can be purchased from www.greengardener.co.uk and other online gardening retailers.

Now is the time to treat our lawns for leatherjackets

Get Pepper Ready For The Next Year

Best Vegetables to Grow in Winter

The Importance Of Lawns For Biodiversity

Get a buzz from gardening – Best plants to boost mental health

How to Grow Your Own Potatoes

Scatter a little LOVE this Christmas with Seedball

Catering to the greener gardeners of the future

Introducing the Bar that never closes

Invasive harlequin ladybirds are better predators than native ladybirds, study finds – but are they driving declines?

How to start an urban garden on a budget

Plants & Us: how they shape human history and society

5 Ways to Turn Your Garden Into a Cosy Autumn Escape

The top five spring-flowering plants to plant this Autumn

Why houseplants are a ‘must have’ to boost your mood