Hundreds of Syrian refugees from the Domiz and 5 neighbouring camps in Northern Iraq are benefiting from receiving 2,000 flower and vegetable seed packets, from Mr Fothergill’s Seeds.

This is the second year of a project that was inspired by a WWI seed lift from the Royal Horticultural Society (RHS) to British prisoners of war living in an internment camp in Germany. Working with the RHS, Mr Fothergills has again donated packets of seeds to the Lemon Tree Trust projects. 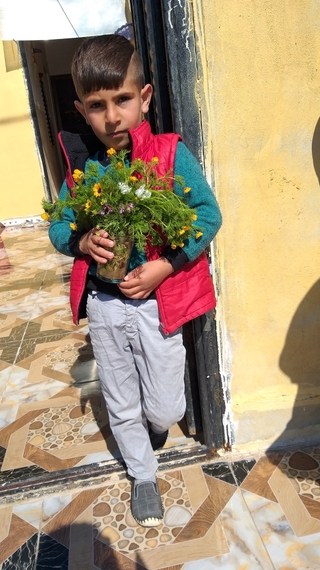 Sent as part of a project set up by the RHS and The Lemon Tree Trust, the seeds were specially chosen for 200 Syrian families, who despite living in difficult circumstances, hope to gain some joy from the benefits of gardening. The list was made up of varieties that would bring colour to the camp and could be grown in the harsh conditions, including marigolds, sunflowers, peppers and cucumbers. Some seeds were also given to researchers of the University of Duhok as part of ongoing studies testing grey water success rates for both edibles and ornamentals. 250 packets of seeds were used in garden starter kits for community gardens and schools in Mosul, Iraq.

Tim Jeffries, Mr Fothergill’s Commercial Director commented “We are absolutely delighted to be able to help out the RHS and The Lemon Tree Trust by donating seeds from our ranges. We hope that they will provide some pleasure for those living in the difficult conditions of the Domiz Camp.”

Online searches for self-sufficiency increase by as much as 809%

RHS Chelsea Garden Product of the Year recognition for Vegepod