MEDWYN WILLIAMS: THE CHELSEA DISPLAY THAT WOULD HAVE BEEN

LAST year, champion grower Medwyn Williams returned to the RHS Chelsea Flower Show for the first time in almost a decade and took home the gold for his exquisite stand that celebrated the traditional 1920s style of displaying vegetables. He also brought a first to the 2019 show, launching the only variety of vegetable to be officially registered under a solely Welsh name – the Y Draig Goch tomato.

Medwyn had been set to return in 2020 with another magnificent display until coronavirus forced the cancellation of any physical element of the annual show.

Talking about returning to the show to take home the 12th gold medal in his Chelsea career, Medwyn said: “Returning to the show last year after some years was incredible. The reception to my display was just fantastic and taking home gold was the cherry on top of an already wonderful cake. Chelsea is the Olympics of the horticultural world, so a gold medal there is truly as high as you can get in the world of gardening. 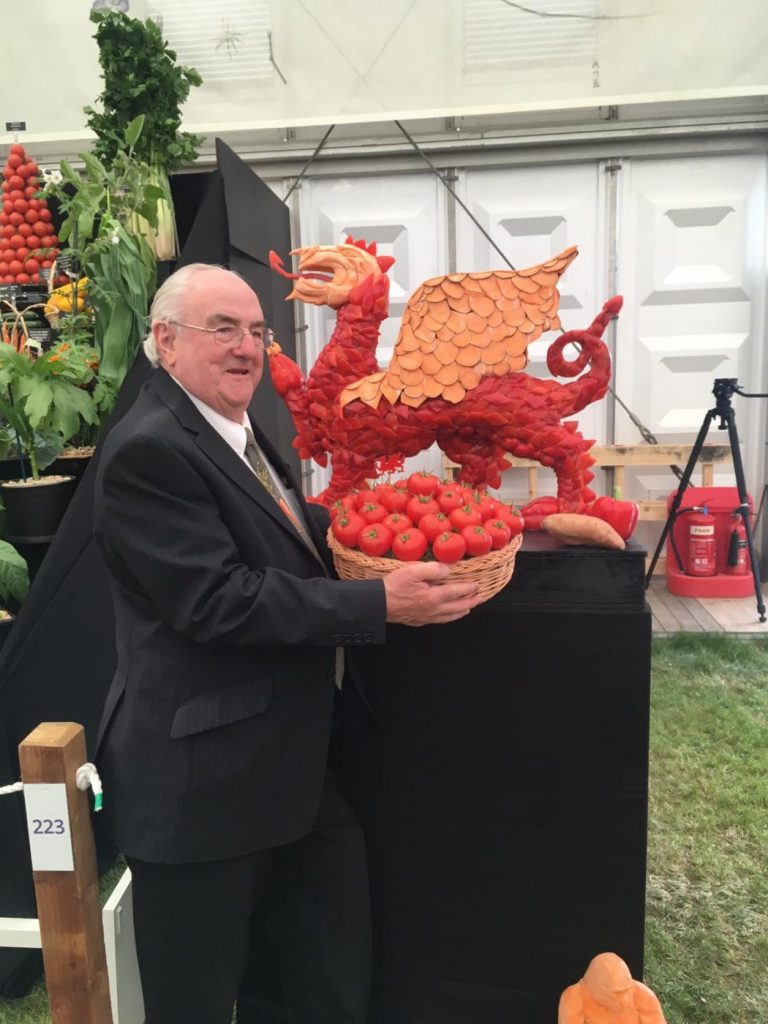 “It was a very sad day when the cancellation announcement came through. While it is completely understandable, it was entirely gut-wrenching. I am pleased to see that some elements will still be able to happen over the internet – it’s the biggest event for the RHS so I’m happy to see that some of the huge effort put in by organisers will still be displayed.”

Despite the cancellation of the physical event, Medwyn has this week appeared in the virtual timetable to showcase some of the best results from this year’s crops.

All of Medwyn’s main showstopper vegetables for RHS Chelsea 2020 were grown using products from CANNA UK, along with Autopot irrigation systems. Through precise measurements and trialling different pots, growing mediums, and environments, Medwyn has been carefully cultivating his best crop yet, particularly for his carrots and onions.

Medwyn said: “I’ve absolutely loved growing using CANNA UK   products this year – particularly the CANNA COCO range of nutrients and substrates. A lot of the growing process involves tailoring your approach to the type of plant you are growing and the environment you are growing in. With support from the experts at CANNA, we’ve spent time understanding how and why to adapt nutrient dosages accordingly. It’s helped produce greater yields but has also helped in gaining a greater understanding of plant nutrition as well.” 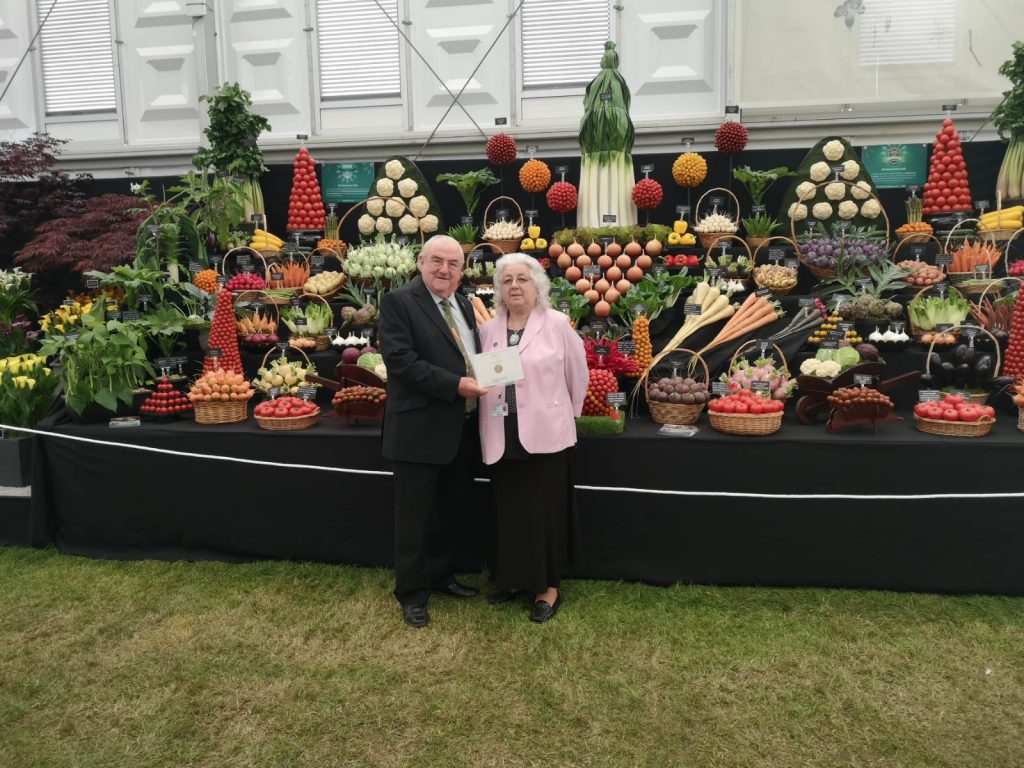 Each CANNA UK product has been created to offer the greatest yields possible when using a specific growing medium or method. CANNA COCO is a line of eco-friendly nutrients and substrates that give plants the perfect foundation on which to thrive, stimulating root development and providing the perfect balance of nutrients and water for exceptional growth.

This season, Medwyn has been growing carrots within an 18 square metre Budbox grow tent filled with DAYLIGHT 315W Ceramic Metal Halide lighting. He’s also been trialling different ways of growing to identify how to get the best yield possible. This has included experimenting with the shape of the pots and using six-inch upright pipes with different growing mediums and feeding regimes.

Impressive growth has been achieved through the use of CANNA COCO Professional Plus and CANNA COCO A&B – which is a complete nutrient system containing natural chelates and humic and fulvic acids that give the plant optimum nutrient absorption.

Medwyn said: “I’ve been saying that this cutting-edge technology means I’ve been growing the country’s most expensive carrots – but only the best for Chelsea! All jokes aside; this environment, mixed with high quality growing mediums has resulted in phenomenal growth. I was expecting to see improvement, but I have been blown away by the harvest we have seen. It really is a shame that we won’t be able to publicly display such showstoppers this year.

“I have also experimented with growing carrots in coir pipes with less sunlight and I’ve been really impressed with the results. Despite being sown around three weeks later than the main crop, the use of CANNA COCO Professional Plus and CANNA COCO A&B has resulted in far superior skin quality in this particular batch.

“After such success, we’re looking to use this method for other crops including beetroot and parsnips as I’m really interested to see if the same improvement will be possible in those yields. I’m also investigating the effect of trace elements and the resulting growth, so I’m planning to trial beetroots in 30l buckets using both CANNA COCO and CANNA TERRA to chart the difference in yield between the two mediums.”

Medwyn’s onions were also grown using the Autopot system along with CANNA COCO Professional Plus. Attentively hand watering the crops has played a large part in the growth process to respond as closely as possible to the plants’ needs before incorporating the use of the Autopot system.

The onion crop was also planted in 15l pots – smaller than in 2019 – and have been irrigated at a rate to maintain a slightly drier substrate than previous harvests.

He said: “With no need to pull in time for Chelsea this year, we’ve been able to push further and see what sort of growth we can achieve – and this will help us learn if we should change our planting calendar for next year. Because of this, I haven’t yet harvested all of the onions, but they are the biggest I’ve ever seen them at this point in the year. My aim was for the onions to reach around 16 inches in diameter for the display, but one of them is almost at 21 inches already.”

Sharing a few details on what his display for 2020 would have incorporated, Medwyn said: “I’m intending to be back at Chelsea in 2021 and will be carrying some of my plans over, so naturally I don’t want to give too much away. However, one of the aims for the future is to showcase more vegetables grown in soil alternatives such as coco.

“I can say that some of our plants have been grown within clear pots inside a normal pot within the Autopot system. This was so that one of the focal points of the display for 2020 to be to showcase the impressive root systems of various plants.

“I’m really looking forward to taking my learnings from this growing season forward, tweaking my techniques and producing an even better crop in time for RHS Chelsea 2021.”

The secret behind one of the best greens in the Midlands

John Deere will not attend international trade shows in 2021

SALTEX 2021 moves into next gear

SALTEX 2021 integral to the industry’s recovery