Having seen them in action on the world-famous Wimbledon courts, The Lensbury Club in Middlesex are one of a growing list of clubs taking delivery of an INFINICUT® mower for use on their grass tennis courts. Along with a set of UltraGroomer™ cassettes from the TMSystem™, Grounds and Gardens Manager Peter Craig says the improvements in the quality and appearance of the six courts hasn’t gone unnoticed by the club’s members. 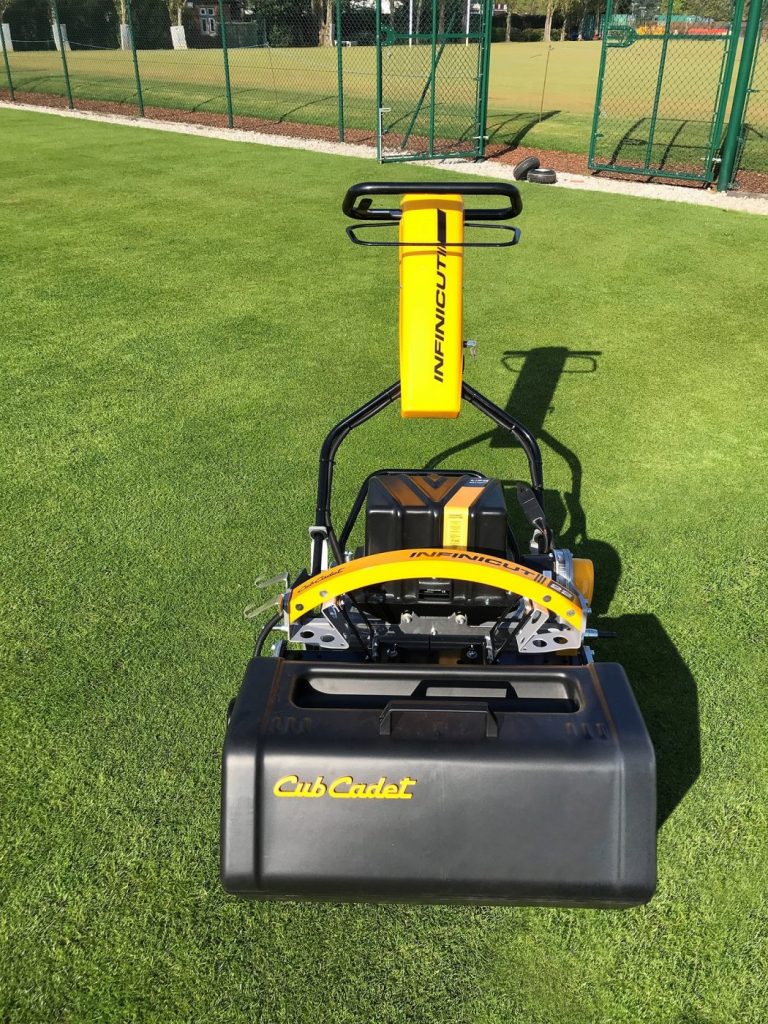 Following an 18-year term at the Hurlingham Club – during which, he started looking into the INFINICUT® – Peter re-joined The Lensbury in 2018. “We started to see some famous venues using the INFINICUT® mowers and I was lucky enough to see them in action first-hand on the courts at Wimbledon which only further sparked my interest” he explains. “When I returned to The Lensbury, I organised for the team to have a demonstration and they loved it straight from the off”. They became the proud owners of a 22” Fixed Head INFINICUT® shortly after its launch at the end of 2018.

“It gives such a fantastic quality of cut and finish – the definition of stripe is excellent and the HOC and bedknife adjustment systems could not be simpler. The fact that it’s battery powered and therefore more environmentally friendly has always been a major plus-point for me; but even more so now, with the courts at The Lensbury located very close to a residential road. In the past, this meant we were unable to use machinery before 8am but, because the INFINICUT® is so quiet in operation, we can get out and mow at 7am. This means we effectively gain five additional working hours a week, where necessary.”

Recently, the club also purchased a set of UltraGroomer™ cassettes from the TMSystem™ range for early and in-season verti-cutting. “We’re running those in our Jacobsen GP400 triple to remove any lateral growth and clean the surface up. We’ll use these as soon as we start getting some consistent growth in April/May, then will aim to cover all of the courts once a month after that”. The UltraGroomer’s are also in use on the site’s ornamental lawns. “Improving these areas was one of my key goals when I returned, and these cassettes have contributed towards bringing the lawns up to the standards we’re achieving elsewhere.”

The grass courts are a major attraction at the Lensbury Club, with a strong membership regularly playing on them. “They’re over the moon with the condition of the courts. We’ve previously had some of the world’s leading players using the courts for tournament preparations and, while this isn’t currently the case, the quality of the courts are certainly good enough once again to host that level of play should they return.”

There’s nothing to beat the APEX zero-turn

Dennis Razor Ultra – just too good not to have

Gifts For Your Little Gardeners This Christmas

Grow your own this Autumn #KeepBritainGrowing

ONE PLANTER RANGE FOR EVERYTHING – WHEREVER YOU LIVE

How to make an autumn wreath

Dobbies and the HTA urge people to #KeepBritainGrowing

IT’S TIME FOR A GROW YOUR OWN CHRISTMAS

ENVIRONMENTALLY FRIENDLY GIFTS FOR THE GARDEN LOVER THIS CHRISTMAS