The word on the show floor was that both visitors and exhibitors felt that SALTEX 2019 was the best one yet.

SALTEX (Sports Amenities Landscaping Exhibition) once again proved to be the industry’s showcase event with over 500 brands on display and a record-breaking 9,104 visitors in attendance.

As soon as the doors opened on the first day of the show there was an electric atmosphere with groundscare enthusiasts swarming into the NEC halls eager to see the latest and most technologically-advanced innovations in grounds management.

The record-breaking 9,104 visitors consisted of those working in or involved with groundscare, sports turf, amenities, estates and green-space management. The show not only attracted visitors from the UK but also a high number of overseas visitors due to the venue’s easy access to national and international transport links.

In fact, SALTEX 2019 saw visitors attending from 49 overseas markets. Many attendees made the journey to the NEC from Europe, Asia, America and Africa – underlining the fact that SALTEX truly is an international event.

One such international visitor was Ebi Ezekiel Egbe, managing director of Monimichelle Sports Construction, who travelled to SALTEX from Nigeria. Ebi explained why the long journey was worthwhile: “The most important thing for us in Africa is to broaden our knowledge on how to maintain the highest standard of sports pitches and to bring the latest innovations in groundscare to the African market. SALTEX gives us the opportunity to do exactly this. It’s a beautiful show and I’ve had a great time.”

SALTEX is also the perfect platform to inspire the next generation of groundscare practitioners and it was encouraging to see a younger demographic of visitors on the show floor, such as 13-year-old Jack Davies who enjoys gardening and mowing lawns in his spare time and aspires to be a professional landscaper.

“I’ve been wanting to come to SALTEX for the past two or three years and this year I have finally managed to convince my Dad to take me. This is like Christmas for me,” he said.

The SALTEX College Cup competition, sponsored by Toro and Reesink, demonstrated just how well young groundscare students are being academically prepared for careers in the industry. The Myerscough College team saw off competition from four other colleges to win this year’s trophy and can now look forward to a visit to Real Madrid’s Bernabéu Stadium where the winning students will get the opportunity to learn from Paul Burgess, director of grounds and environment for the Spanish footballing giants.

The competition was just a number of show attractions and the new Eco Village indoor demonstration area made a storming debut. In a dedicated area on the show floor the Eco Village featured a programme of daily product demonstrations which featured cutting-edge sustainable technology by Fleet Line Markers, STIHL UK, Overton UK, Avant Tecno, Cub Cadet, Linddana, Husqvarna, Allett Mowers and Sherriff Amenity in front of a large crowd of show attendees.

The buzz on the show floor was palpable, as recognised by the legendary Keith Kent, former head groundsman at Twickenham Stadium. “The Institute of Groundsmanship has done tremendously well in bringing so many exhibitors and visitors in and it is just a joy to see such a busy show. You cannot walk anywhere without seeing something that catches your attention,” he said.

Indeed, there was something for everyone on the show floor and this year’s SALTEX Innovation Award certainly caught the eye. From robotics to hybrid mowers, ground printers to state-of-the-art irrigation, grow lights to line trimmers – visitors had the opportunity to see the record-breaking 34 entries on the show floor.

With the entries submitted and rigorously evaluated by an independent panel of judges, it was decided that there were three stand-out innovations – the Forza 360° football goal wheels from Net World Sports, the BU50 grow lighting system from SGL and the INFINICUT® SM34 rotary mower from MTD Specialty Turf Products.

The three finalists were given a final opportunity to impress the judges as they took to the stage and the INFINICUT® SM34 rotary mower was pronounced the overall winner. Second place went to SGL and third place went to Net World Sports.

The INFINICUT® gained rave reviews with the panel of judges claiming that it “has taken the rotary mower into the 21st century,” and that “the revolutionary introduction of a side collector has allowed for rollers, not wheels, thus eliminating wheel marks on the turf.”

An increasing number of manufacturers on the show floor were also showcasing eco-friendly products. As well as those demonstrating in the Eco Village, exhibitors such as Pellenc, John Deere, Ego, Ryetec, Demon International, AMS Robotics, McConnel and Dennis Mowers all used SALTEX to launch new robotic and battery-powered products.

“These innovations have low vibrations, are environmentally friendly and great for health and safety – all things that help people on the ground like me. It’s great to see so many of these machines in one place,” says John Ryan, founder of the Lawn Care Legends online networking community.

Many visitors also benefited from free one-to-one turf management advice in the Ask the Expert feature; received career advice in the Job Clinic and had their soil samples assessed in Pathology and Soil Science LIVE- as well as specific technical advice gained from industry experts on the exhibition floor. 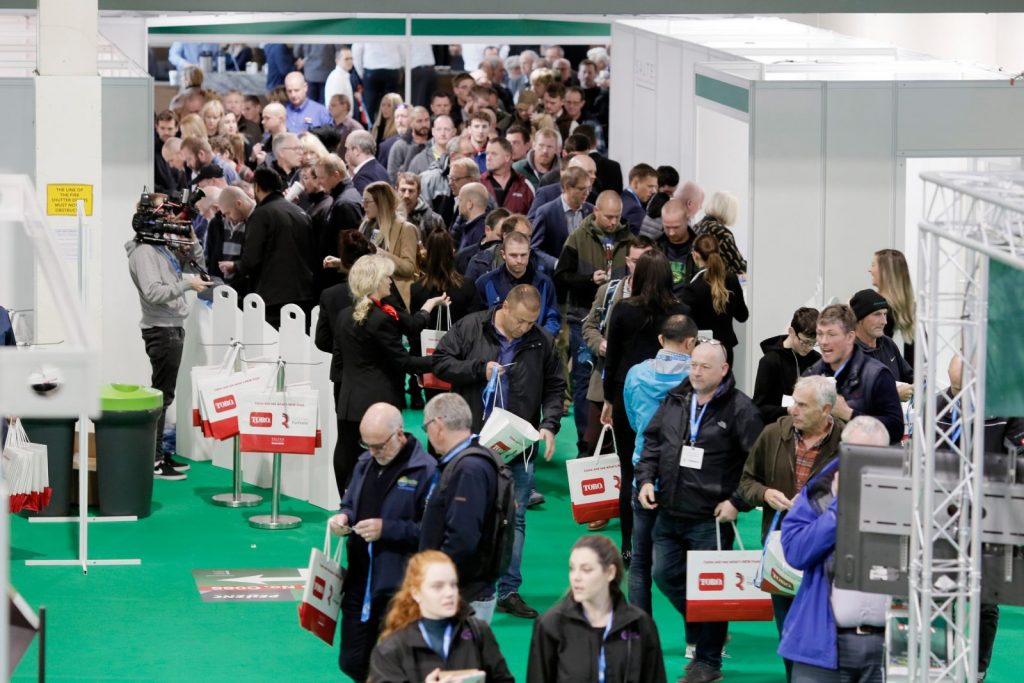 Commenting on the effects of the record-breaking attendance at this year’s show, many exhibitors thought that a large proportion of visitors to their stands were high-quality buyers with serious intent.

“We’ve exhibited at a lot of shows in the past couple of years, but this has been the busiest show that I have ever experienced,” said Jordan Watson, grounds care field support for STIHL UK.

Echoing Jordan’s comments, Les Malin, managing director of Etesia UK, said: “We’ve been a long-term exhibitor at SALTEX for over 20 years and I can honestly say that I cannot remember a show were we had so much activity and people on the stand right to the end of both days.”

According to sales manager, George Potter, debut exhibitor JCB enjoyed a hugely successful first SALTEX experience: “We’ve had lots of people on the stand, a huge number of enquiries and quite a lot of demo requests, which has been great.”

All eyes now turn towards SALTEX 2020 the exhibition’s 75th anniversary and CEO Geoff Webb is already looking forward to the celebratory event.

“SALTEX has moved from a horse racing track in Windsor to the National Exhibition Centre in the middle of the country and the fact that we are now gearing up for our 75th annual show next year is testament to the community of the sports turf industry and how it has grown.”

SALTEX 2020 will take place at the NEC, Birmingham on 4 and 5 November.

Big turn out for Ariens at Saltex

MEDWYN WILLIAMS: THE CHELSEA DISPLAY THAT WOULD HAVE BEEN